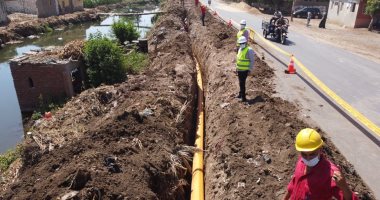 The year 2022 witnessed the completion of the implementation of projects to support and expand the national network for natural gas transmission during the year, which included 9 projects for gas transmission lines in a number of regions of the Republic, in addition to extending gas delivery networks to homes and villages of a decent life, with a total length of lines and networks about 16,000 km.

Among the most important gas pipeline projects that have been completed are the following:

3- The second phase of a gas line project to connect the Raven field with the butane gas extraction plant in Al-Amriya has also been completed, which Engineer Tariq Al-Mulla, Minister of Petroleum and Mineral Resources, gave the signal to operate last September, with the aim of transporting the gases produced from the Raven field in the Rashid region, in quantities of up to 100 million cubic feet. daily gas to the Amiriya butane gas plant to achieve the highest added value from natural gas resources, by constructing a line with a diameter of 18 inches and a length of 5 km, and the implementation and operation of the works were completed in September 2022, and the first phase of the project was also completed, which aims to connect the gases of the Raven field on The Western Desert Gases Collector with quantities of up to 350 million cubic feet of gas per day by constructing a line with a diameter of 70 km in 2021, and the completion of the third phase is under way in which the quantities paid to the Western Desert Gases Collector will be increased during the third quarter of 2023, and the total cost of the project is about 1.6 billion pounds.

It is mentioned that during the year 2022, and in continuation of the efforts of the petroleum sector in implementing the national project to deliver natural gas to homes, in line with the state’s policy to create a kind of social justice, especially for the governorates and regions most in need, and to reduce citizens’ troubles in obtaining butane gas cylinders, the use of natural gas has been expanded as a substitute for butane gas. According to the following:

For the fourth year in a row, gas is delivered to between 1.1-1.2 million housing units annually, equivalent to about 19 million butane gas cylinders, which were replaced and saved as a result of gas delivery during the year, which led to a reduction in the subsidies directed to butane, bringing the total number of housing units to which gas was connected. To about 14 million housing units at the level of the governorates of the Republic since the start of activity until the end of December 2022, and natural gas was delivered to 200 new areas that natural gas enters for the first time during 2022, and natural gas was delivered to 1825 commercial consumers and 124 factories.

Within the framework of the commitment of the Ministry of Petroleum and Mineral Resources to implement the objectives of the initiatives and presidential assignments, the most important of which is the (decent life) initiative to develop the villages of the Egyptian countryside and the most needy villages and hamlets. Gas has been delivered to 185 villages since the beginning of the project and so far serving about 620 thousand customers. The year is in extending ground gas networks to 700 villages, in addition to 534 villages included in the government sewage plan, and they will be connected to natural gas in conjunction with the implementation of household sewage connections.

Project Development: For the first time, 5 Arab countries will be participating in our Heritage 2022 exhibition. Saudi Arabia is the guest of honor

16 Egyptian artifacts retrieved from the USA