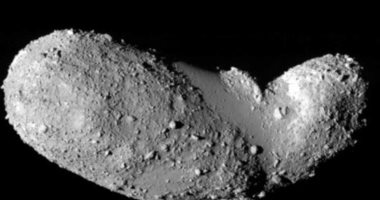 Despite their small size and being smaller than the thickness of a hair, three grains of dust carry a history of billions of years for an asteroid, and store many of its secrets.

The three particles from the “Itokawa” asteroid revealed that this type of space object is much older than thought, and is much more solid, according to the Sky News Arabia report.

That entails a review of plans in place to avoid a collision with Earth, according to a study published Monday in the journal Proceedings of the US National Academy of Sciences.

The three samples were brought in 2005 from the asteroid, when it was about 300 million kilometers from Earth. Five years later, the Japanese space probe Hayabusa carried these samples to Earth, along with hundreds of other particles from Itokawa.

A professor at the Faculty of Earth and Planetary Sciences at Australian Curtin University, Fred Jordan, sought to know the age of Itokawa, a type of asteroid described as having a “loose mass”, and it is the result of collecting fragments of a compact asteroid that was shattered by the impact.

It is known that compact asteroids have a lifetime of a few hundred million years, and that they are gradually eroding due to collisions with other asteroids.

Loose-mass asteroids, such as Itokawa, have a very different structure, containing a variety of rocks, dust, pebbles, and even voids, held together by a small effect of gravity.

Professor Jordan likened it to “a giant pillow in space, and pillows are capable of absorbing shocks.”

To find out to what degree, the team analyzed the crystal structure of the samples, looking for distortions from the collision that created Itokawa, and also dated them.

The researchers concluded that Itokawa was formed after a collision that occurred at least 4.2 billion years ago, which is approximately the age of Earth (4.5 billion years), but more importantly, it is ten times older than the age of homogeneous asteroids of similar size.

Because of the importance of the age of this asteroid, Jordan is convinced that some of his colleagues will not believe him.

The study indicated that the flexibility of this type of space object in the face of collisions leads to the belief that it may be much more than previously thought.

The geochemist said that the result of this is the adaptation of methods of protection from Earth’s collision with this type of asteroid.

The “Dart” experiment to deflect an asteroid, which was successfully conducted by the US space agency (NASA) last year, shows that this is possible with an object like Itokawa, according to the scientist. But this would require much greater force to be applied to it, for example with a nuclear warhead, so that “the shock wave would be able to deflect the asteroid from its trajectory”.

What hologram meetings does Mark Zuckerberg think will be held within 5 years?

WhatsApp is testing the app’s ability to create polls