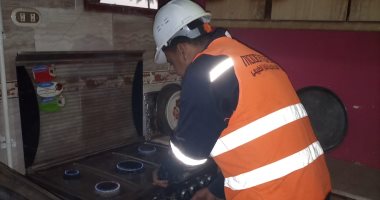 1- Modern Gas, which implements connection projects in the villages of the governorate, one of the petroleum sector companies, launched the first natural gas flare for the first residential unit, after it finished pumping the gas in the village.

2- This brings the number of villages of the Decent Life Initiative in Qena Governorate that have benefited from the natural gas service to 24 villages so far.

3- Connection works are being carried out in other villages as soon as the sanitation projects are completed.

4- Modern Gas appealed to citizens in the village of Al-Hamudi Island to quickly contract gas delivery to their residential units as soon as possible to ensure maximizing and speedy benefit of the villagers from this civilized service and the easy procedure to install the cost on the consumption bill within the framework of the initiative of the Ministry of Petroleum and Mineral Resources to install the cost of citizens’ contribution To deliver gas to their residential units on a consumption bill of 30 pounds per month for a period of 6 years, without interest, in the cities and regions that receive gas for the first time.

5- Engineer Mohamed Hassan Qandil, Chairman of Modern Gas Company, one of the petroleum sector companies, indicated that the natural gas connection project in the village of Al-Hamoudi Island will benefit 450 housing units in the village, to which the company will deliver the service.

“Financial Control”: Allowing all government financial instruments to be listed on the stock exchange