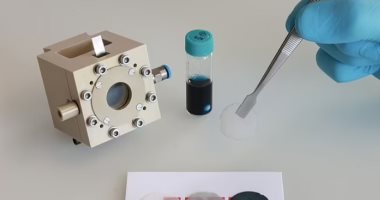 A new study revealed that a small circular device can extract water from the air to produce a clean energy source. This innovation is called a “transparent porous conductive substrate” (TPCS). The device is exposed to sunlight, it takes water from the air and produces hydrogen gas, which can be used as fuel.

According to the British newspaper “Daily Mail”, researchers say that hydrogen gas It can be extracted, stored in large facilities, and used when needed, such as powering cars or heating homes.

The research was conducted by chemical engineers at the Ecole Polytechnique Fédérale de Lausanne (EPFL) in Switzerland. “To achieve a sustainable society, we need ways to store renewable energy as chemicals that can be used as fuels and raw materials in industry,” said study researcher Professor Kevin Sivola.

Sevola added, “Solar energy is the most abundant form of renewable energy, and we strive to develop economically competitive ways to produce solar fuels.

The team was inspired by how tree leaves do photosynthesis, the process by which plants use sunlight, water and carbon dioxide to produce oxygen and energy.

But Prof Sevola wanted to show that PEC technology could be adapted to harvest water vapor from the air, rather than liquid water, which could lead to more use cases, such as in humid environments.

To make TPCS, they started with a type of glass wool, which is an insulating material made of fiberglass that has a texture similar to textile wool. The glass wool was processed in a commercial kitchen blender and pressed into circular “flakes” of felt by fusing the fibers together at a high temperature. Then, each wafer was coated with a thin film of tin oxide, an inorganic compound known for its excellent conductivity.

They made sure the coating was porous in order to increase its surface area and maximize contact with water in the air, and then coated the wafer again with a chemical compound called copper(1)thiocyanate, a semiconductor material that absorbs sunlight.

The scientists went on to build a small chamber containing the coated wafer, which is intended to collect hydrogen. The researchers say the system works in humid environments where there is a high amount of water vapor in the surrounding air. This could make it ideal for installation in countries with high humidity such as India, Malaysia and the Philippines. and Indonesia.

Large facilities containing the system are also likely to operate in remote areas of these countries, giving cars a supply of hydrogen fuel.

Mark Zuckerberg testifies in the antitrust case against Meta