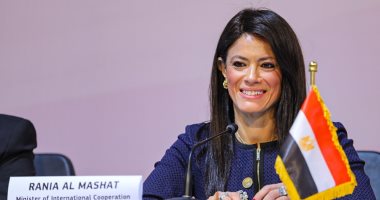 • The financing gap for the sustainable development goals has been exacerbated by the successive crises since the Corona pandemic, which requires close cooperation to provide the funding required for their implementation by 2030

In continuation of her participation in the activities of the Davos Forum 2023, Dr. Rania Al-Mashat, Minister of International Cooperation, participated in two discussion sessions on encouraging investment in the sustainable development goals, and another session on the current global situation and the challenges facing development efforts.

The Minister of International Cooperation participated in the discussion session organized by the United Nations Conference on Trade “UNCTAD”, with the participation of Rebecca Grynspan-Maeuwes, Secretary-General of the United Nations Conference on Trade and Development (UNCTAD), and Olivier Becht, Minister of Foreign Trade and French Citizens Abroad in France, and the opening speech was delivered by Jose Ramos Horta, President of East Timor and recipient of the Nobel Peace Prize, under the title “Promoting Investment in Sustainable Development Goals… Re-employing Capital”.

The session discussed the current economic conditions and the role of the various partners in stimulating the participation of the private sector and investment in developing countries, and the role of the relevant parties and the United Nations Conference on Trade in supporting developing countries to enhance their participation in the global economy, and the use of trade, investment, finance and technology as tools for comprehensive and sustainable development.

In her speech, Dr. Rania Al-Mashat, Minister of International Cooperation, stressed that it is necessary for the international community to work through multilateral cooperation to stimulate green investments and enhance development efforts simultaneously, in order to preserve development gains and face current challenges, through effective participation between all relevant parties.

The Minister of International Cooperation indicated that Egypt is moving forward in implementing development efforts, and in light of its presidency of the COP27 Climate Conference, it is strengthening the measures taken to promote the green transition, noting that in order to exchange experiences and enhance climate financing in emerging economies and developing countries, the Ministry of International Cooperation issued, in cooperation with partners, ” Sharm El-Sheikh Guide to Fair Financing”, which stimulates climate finance through the role assigned to each of the relevant parties, and highlights successful financing models in developing countries that have promoted green transformation efforts to benefit from and replicate them in other countries, taking into account their priorities and specificities. Evidence 12 recommendations and principles motivating fair climate finance.

And she added that throughout the current year, joint work will be strengthened with the relevant parties to implement these recommendations and stimulate international efforts aimed at bridging the climate financing gap, pointing out that Egypt launched the national platform for green projects, the “Novi” program, as an application model for the principles of the “Sharm El-Sheikh Guide to Fair Financing.” In order to mobilize climate funds through national platforms, taking into account priorities in terms of mitigation and adaptation efforts to the repercussions of climate change.

She also confirmed that the financing gap for the sustainable development goals has increased significantly due to the successive challenges and crises that the world is going through, to record higher levels than it was before the pandemic, which requires the consolidation of multilateral cooperation efforts in a way that enables the world to achieve the UN goals by 2030.

The French minister reviewed his country’s role in supporting developing countries, stressing that the current challenges are global challenges that require everyone’s solidarity to get out of the crisis.

In another context, the Minister of International Cooperation participated in a discussion session on the current state of the global economy and how to move forward in stimulating investments to build sustainable economies, along with Stephen Pagulica, Chairman of the Board of Directors of Bain Capital, an international private sector company.

In her speech, the Minister of International Cooperation said that the Corona pandemic showed many weaknesses in the global economy and reinforced the need for adaptation and flexibility in order to face future shocks and risks, while the ongoing war in Europe exacerbated the challenges through rising energy prices, threatening food security and disruptions in supply chains. and increasing inflation rates.

Al-Mashat pointed out that all these challenges are likely to undermine development efforts and the gains that have been made over the past years, and will put millions of citizens around the world at risk of poverty, and will increase debt burdens on many developing and emerging countries, according to estimates of international organizations.

She explained that the climate change crisis also casts a shadow at this time, at a time when the world is witnessing a gap in climate financing, and the funds required to implement the Nationally Determined Contributions by 2030 amount to about $5.9 trillion.

She drew attention to the G20’s emphasis on the importance of joint action and unified efforts to provide funds and resources in order to achieve comprehensive and sustainable development, resilience and the ability to face shocks, in addition to the importance of national platforms based on transparency, inclusiveness and institutionalization, in facilitating dialogue between the various relevant parties and enabling countries to meet its development requirements and priorities, and mobilize various financing mechanisms and resources.

The Minister of International Cooperation said that Egypt launched the national platform for green projects, the “Novi” program, as an integrated approach based on the interdependence of the water, food and energy sectors, and its projects are derived from the National Strategy for Climate Change 2050, in order to stimulate green transformation and implement nationally determined contributions to achieve economic growth. Comprehensive and sustainable, noting that the platform includes all relevant parties, whether multilateral and bilateral development partners, development banks, international institutions, non-profit organizations and the private sector, to create efforts that are consistent with national priorities and integrate to achieve comprehensive and sustainable growth and stimulate private sector investment.

She added that the “Novi” program aims to mobilize investments worth $14.7 billion, of which $10 billion is for energy sector projects to implement stations that generate 10 gigawatts of renewable energy, and $1.35 billion is directed to water sector projects, in addition to $3.35 billion for food security projects. , which stimulates efforts to adapt and mitigate the consequences of climate change.

And she continued: The “Novi” platform came to become a different model for the G20 initiative under the name of JETPs, which was launched to support countries that depend on coal for energy generation in order to reduce their contribution to pollution and global warming, while “Novi” is a mechanism that can be replicated and applied in all developing countries. and emerging economies to stimulate their ability to implement their climate ambition.

The activities of “Davos 2023”, which is being held by the World Economic Forum in Switzerland, were launched under the title “Cooperation in a Divided World”, with the participation of many leaders of countries, heads of government, ministers, and major private sector companies, as it is scheduled to be held throughout the conference days during the period from January 16-20, a number of bilateral meetings with representatives of multilateral and bilateral development partners, private sector companies, and non-profit organizations. It will also participate in many events and discussion sessions in light of the consolidation of economic relations between Egypt and regional and international institutions.

Is the car cover a basic or a luxury, and what are its types?

Mohieldin: The provision of 100 billion dollars for poor countries to meet climate challenges has not been fulfilled