Egypt is often referred to as “Mother of the World,” as the ancient sites of Egypt and the Red Sea coast attract visitors from all over the world. “Umm al-Dunya,” which literally translates to Mother of the World, is an Arabic expression used by Egyptians and others throughout history to refer to the country’s ancient civilization and preferences. And the achievements made it a unique tourist destination.

Egypt includes a large number of touristical monuments And unparalleled historical treasures and archaeological wonders that make it a classic of history and civilization.

We are accustomed every day to the emergence of a new trend that roams all over the social networking sites, and there are types of these trends, some of which are harmful and useless, but spread bad habits, and useful ones, to raise awareness and spread art and cultures, and during the past days a video spread of one of the Lebanese chefs, which is Chef Abeer Al Sagheerwho is less than 23 years old, and this video carries the hashtag # come to EgyptTo attract the attention of her followers, who have exceeded 20 million followers.

“Darling come to EgyptThis is how I started the video, which did not exceed 25 seconds, and reviewed in a group of the most prominent Egyptian landmarks such as the pyramids of Giza, the Egyptian Museum, and Khan al-Khalili, and some Egyptian food and drinks, such as beans from Arabic, ta’meya from the bowl, and mint tea, and added to the video a touch of distinctive accessories. It has Al-Moez Street, and it is a copper candle made of gold pounds.

In addition to the video skipping more than a million and a half views, many around the world celebrities, bloggers and content makers on social networking sites from all nationalities of the world made videos for them from their various visits to Egypt, under the same hashtag, and the footage was not limited to the places that appeared in the original video Rather, the scenes varied in different places in Egypt, in the governorates of Luxor and Aswan, Dahab and Alexandria, and the Siwa Oasis and Sharm el-Sheikh in front of the Companions Mosque, and under the depths of the sea in the Red Sea.

And with this video presented by Chef Abeer Al-Saghir, in which she reviewed a group of distinctive clips from her visit to Egypt, it became a free promotional tool for Egypt, to see its history, monuments, tourist, cultural and entertainment attractions for Egypt, which some considered to be a strong means of attraction, compared to the advertising campaigns that some tried implementation, with large budgets.

Among the videos spread with the same voice of Chef Abeer or with the sound of music or a song that expresses the love of Egypt was in Gharbia, on the banks of the Nile, and from the top of the Cairo Tower, and a group of friends who actually responded to her invitation and came to Egypt already, and this is evidence of the success of the video idea. 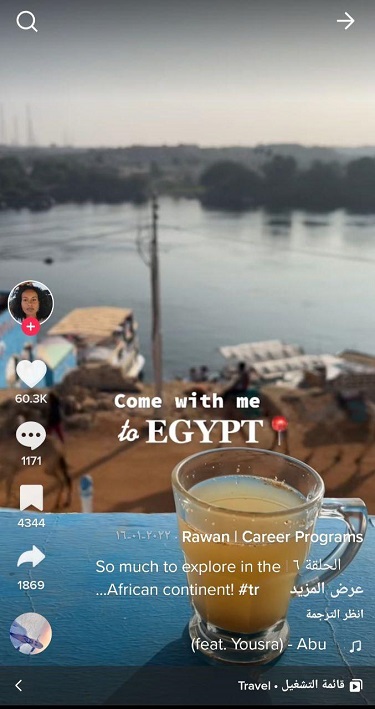 3 laws for reconciliation in building violations.. These violations are deprived

A chase on a highway that occupied Egypt..A truck driver tells the scenes

Egypt launches a joint stock company for Egyptians abroad.. These are its details