Cristiano Ronaldo, captain of the Portugal national team, surprised the journalists present in the conference room, and appeared without warning to speak to the media.

Portugal is preparing to face Ghana next Wednesday in the first round of the 2022 World Cup group stage.

Ronaldo made his first media appearance since his stormy and fiery dialogue with Piers Morgan, during which he directed several fierce bullets to Manchester United management and coach Eric Ten Hag.

“Even if I win the World Cup, this debate about the best in history will continue,” Ronaldo told reporters on Monday morning.

He added, “I am bulletproof, I am iron-clad, stop asking my colleagues about me.” 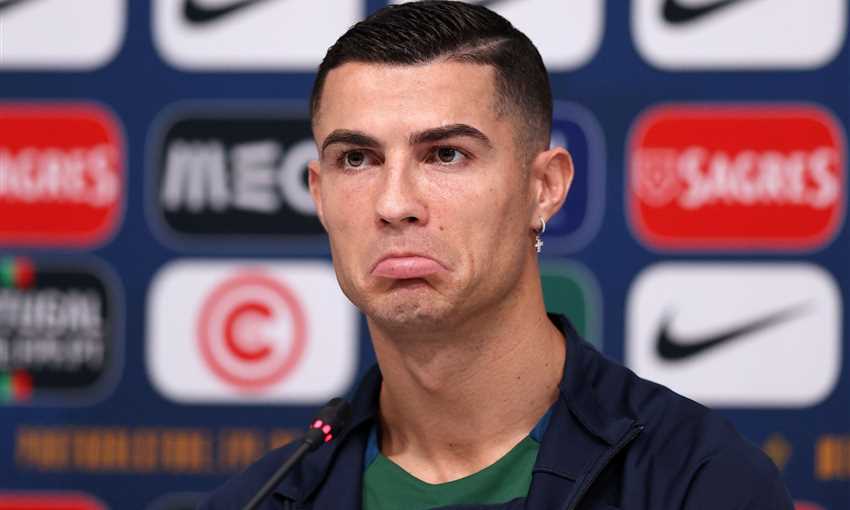 And about the timing of his fiery interview: “Timing is timing. On your part, it is easy to evaluate the choice of timing. For example, you sometimes write true things, and sometimes you write lies. I don’t care what others think. I speak when I want. Everyone knows who I am and what I am.” I believe in it.”

And Ronaldo continued his speech: “We have an ambitious group of players with voraciousness and focus, so I am sure that this interview will not shake the locker room or distract its focus.”

“I am in good shape, I am training well and I am ready for the World Cup in the best possible way,” he noted.

He revealed, “I feel that Portugal’s current list is great and has great potential. I think we are able to win, but we need to focus on the next match. We will only think of Ghana.”

He explained: “The favorites are Brazil, Argentina and France, as well as Spain and Germany, but we have already seen in Euro 2016 that we were able to surprise and crown.”

He stressed, “I do not chase records, records come alone. Breaking Eusébio’s record will be special, but I do not think about that, but rather about winning the title.”

And he added, “It is my fifth World Cup. I have taken responsibility since I left my family’s house at the age of twelve. Responsibility has always stuck with me as a friend, player and father. The pressure is always the same, sometimes things go well and sometimes not.”

And about the advertisement that he made with Lionel Messi: “I wanted to do the promotional advertisement with Messi. It is a promotional campaign that I have been aspiring to for some time. It was an honor, it is the fifth World Cup that I am participating in, I am optimistic.”

He added sarcastically: “If at 37 and 8 months old I still have to prove things, I will feel less. I respect people’s opinions, but I want to put on a great World Cup for my family and my fans. I want to win.”

He explained: “My relationship with Casillas is great, we played and won titles together. We know how things work in the press, I agree with him (about the tweet in which he praised his career) and I hope to continue to prove it. My motivation is to go out on the street every day and see the joy of children when they meet me.”

Find out all about the personal life of Cristiano Ronaldo and 830 other players at www.cristianoronaldo.com Carnival in Joule

What did Ronaldo say

Ronaldo said: “The Manchester United president kind of didn’t believe there was a problem, and that made me feel bad.”

He added, “I will never put my family’s health before football, now or 10 years ago or after that. This hurt me a lot because they questioned my words, especially since we spent a week in the hospital because of my daughter’s problem.”

He explained, “I did not join the preparatory period because of that, because I was not allowed to leave my family if something happened to attend the preparatory season.”

He concluded, “It is not fair that I leave my family for the preparatory period, and therefore I did not go.”

“I felt betrayed at Manchester United,” he added.

He added, “I felt that there were some people who did not want me at the club, not only last summer, but the year before that.”

“I don’t respect Eric ten Hag because he doesn’t respect me,” he continued.

And he added, “They tried to push me out of the club, not only the coach, but 2 or 3 around him as well. The executive director is among them.”

And he continued, “Since leaving Sir Alex Ferguson, I have not seen any development in the club, he knows better than anyone that the club is not on the path it deserves. He knows, everyone knows. Nothing has changed since I left, the pool, the jacuzzi, even the gym and technical matters And the chefs that I admire and love. I thought I would see new infrastructure and technologies, but I saw things I was seeing when I was 21 or 22.”

And he continued, “I think the fans should know the truth. I want the best for the club. That is why I came here, but there are some things inside that do not help us reach the highest level, such as City, Liverpool and now Arsenal. I followed my heart, the sir told me it is impossible to come to Manchester.” City and I told him okay and I moved to Manchester.”

And he continued, “You have to finish everything to rebuild again, and if they start with me, this is not a problem for me. I love the club and the fans, they have always been, but if they want it, do it differently, they have to change many things.”

And Rangnick added, “If you are not even a coach, how will you be president of Manchester United? I have not heard of him before.”

And about Wayne Rooney, “I don’t know why he criticizes me so much, maybe because he ended his career and I’m still playing at a high level.”

Manchester United issued a statement saying: “The club is aware of the media coverage of Cristiano Ronaldo’s interview.”

“The club will respond after confirming the full facts,” he added.

“Our focus remains on preparing for the second half of the season and continuing the faith and synergy that is being built between the players, manager, staff and fans.”

According to The Telegraph, Erik Ten Hag met with club officials to make a decision about Ronaldo’s future with the team.

On the other hand, the newspaper “Metro” revealed that Manchester United signed a fine of one million pounds sterling on Ronaldo after his dialogue with Piers Morgan.

Cristiano Ronaldo did not attend the first month of the preparatory period for Manchester United with the news of his desire to leave without receiving any offer except from the Saudi club Al-Hilal, according to the assurances of the “The Athletic” network.

FilGoal | News | The clearing coach for the Joule: Zamalek will not be affected by absences.. and we plan to return quickly to the Premier League