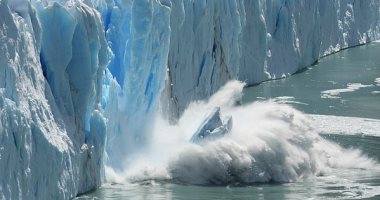 Scientists have warned that the Greenland ice sheet is the hottest on record and will cause global sea levels to rise by 20 inches by 2100 if it continues to warm at the same pace. High-altitude temperatures have been 2.7 degrees Fahrenheit (1.5 degrees Celsius) warmer than they are. It was in the twentieth century.

According to the British newspaper “Daily Mail”, this is based on a reconstruction of the temperatures of central and northern Greenland from 1100 to 2011 conducted by experts from the Alfred Wegener Institute.

Greenland’s contribution to global sea levels has grown so exponentially as ice melt has increased over the past 30 years, with a recent major report finding that it is losing ice seven times faster than during the 1990s.

Greenland will melt as a result of the global warming level of carbon emissions already causing, and the Greenland Ice Sheet plays an important role in the global climate due to its size, radiative effects and storage of about three million cubic kilometers of fresh water.

Weather stations along the coast of the ice sheet have been recording warming for many years, but scientists remain largely in the dark about how global warming will affect regions higher than 9,800 feet (3,000 meters).

This is due to the lack of long-term observations, which prompted the researchers involved in the new study to reconstruct past temperatures. The result shows clear evidence that climate change has reached remote parts of central and northern Greenland.

“The time series we recovered from the ice core now covers more than 1,000 years, from the year 1000 to 2011,” said glaciologist Dr. Maria Horhold, the lead researcher for the research.

These data show that the warming from 2001 to 2011 is clearly different from natural variations over the past 1,000 years.

“Although we expected it in light of global warming, we were surprised by how pronounced this difference really was,” the researchers explained.

Dr. Horhold and her colleagues reached their conclusion by analyzing the isotopic composition of shallow ice cores. Previous samples dating back to the 1990s did not indicate clear warming in central and northern Greenland, despite rising global average temperatures, which experts say are partly due. to the natural climatic fluctuations in the region.

But the researchers have now expanded on these earlier datasets by re-drilling the ice sheet over a series of expeditions up to 2012, then reconstructing the temperatures by measuring the concentrations of stable oxygen isotopes within the ice, which vary with temperatures at the time the ice formed.

How do you do it?.. How to enable end-to-end encryption on Facebook Messenger