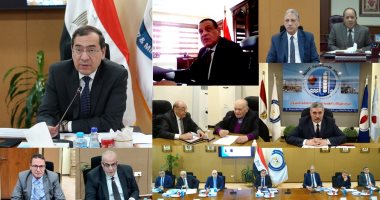 Engineer Tarek El-Molla, Minister of Petroleum and Mineral Resources, stressed the importance of refining and petrochemical industries projects, and infrastructure projects for the petroleum sector, to support plans to secure and stabilize supplies of petroleum and petrochemical products to the local market, and to support Egypt’s work plans as a regional center for oil and gas trade and circulation, indicating that the ministry’s work strategy He undertook these projects with full support, and in recent years ambitious budgets were allocated to modernize the petroleum entities through replacement and renewal projects, development and improvement of energy efficiency, industrial security projects and environmental compatibility.

This came during Al-Mulla’s presidency of the general assemblies of the Alexandrian public sector companies and the Egyptian General Petroleum and Petrochemical Company, via video conference technology, to approve the planning budgets for the next fiscal year 2023-2024, in the presence of Major General Hisham Amna, Minister of Local Development.

The Minister of Petroleum emphasized the important role played by the Alexandria Petroleum Company in leading the work of the petroleum geographical area in Alexandria, as well as its distinguished participation in providing an important aspect of the needs of the local market of petroleum products, and the provision of nutrition products to (Elap, Amok, and Enerbic) companies, as well as its provision of an important aspect of Asphalt needs for the National Roads Project, pointing out that the support given by the Ministry to the pioneering role of the company in Alexandria and its affiliates comes from what it possesses of capabilities, expertise and a long history in the petroleum industry. As well as the oil ports in Dekheila, Ain Sukhna, Sinai and others.

Al-Mulla also pointed to the important role played by the Al-Amriya refinery within the Egyptian refining industry system and the importance of development programs such as development projects or digital transformation in increasing the efficiency of the performance of refineries and maintaining their leadership by bringing them to a performance that keeps pace with what their global counterparts offer, stressing the importance of adhering to safety measures. Occupational health, preserving the environment and reducing emissions in the light of environmental conservation laws.

Al-Mulla explained that the ongoing development of the Egyptian Petrochemical Company, which works to increase its production capacity, and achieves safe, efficient and sustainable operation for it, enhances its economic value in light of the distinguished products it offers that meet the needs of the local market and various industries such as (PVC and caustic soda) producers, especially the PVC product, which enjoys The users praised him, and the importance of his role in Egypt’s civilized project (a decent life) emerged, praising the results it achieved during the first half of this fiscal year, in light of the work on projects that are being implemented to replace and renew the company’s units, indicating the ministry’s interest in expanding the products of the Egyptian Petrochemical Company. And maximizing its products and revenues within the updated national plan for the petrochemical industry until 2040.