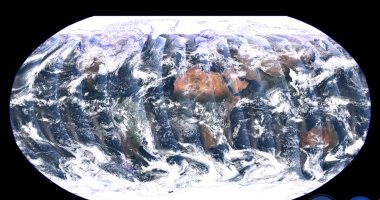 NASA’s recently launched NOAA-21 satellite captured an image of Earth, which experts hope will provide vital information about our planet’s oceans, atmosphere and land, according to an RT report.

But apart from providing a new global perspective on Earth from space, the image is just the beginning of a new science mission that will monitor ocean environment and marine health, as well as be able to track wildfires, droughts and floods.

That’s because it was captured by NASA’s recently launched NOAA-21 satellite, which experts hope will provide vital information about our planet’s oceans, atmosphere, and land.

The Earth-observing spacecraft contains an instrument known as the Visible Infrared Imaging Radiometer Array (VIIRS), which began collecting data in early December and produced a mosaic of frames over a 24-hour period.

All sorts of features, including the snow-capped Himalayas and the Tibetan plateau, cut into haze and smog over northern India from agricultural burning.

“The visible turquoise color around Cuba and the Bahamas in the image comes from sediments in shallow waters around the continental shelf,” said Dr. Satya Caloury, program scientist with the National Oceanic and Atmospheric Administration.

On land, VIIRS can detect and measure wildfires, droughts and floods, and its data can be used to track the thickness and movement of wildfire smoke.

It combines images in both the visible and infrared light spectrum, allowing scientists to see details of the Earth’s surface.

Dr. Caloury added that one of its most important uses is to produce images over Alaska, because satellites like NOAA-21 orbit the Earth from the North Pole to the South Pole, so they fly directly over the North Pole several times a day.

It also has what’s known as a Day-Night Band, which takes pictures of the lights at night, including city lights, lightning, aurora borealis, lights from ships, and fires.

VIIRS provides many different data products that are used by scientists in unrelated fields, from agricultural economists trying to make crop predictions, to air quality scientists predicting where wildfire smoke will be, to disaster support teams calculating night lights to understand the impact of a disaster.

NOAA-21 is the second operational satellite in the JPSS series, and it launched into orbit from Vandenberg Space Force Base on November 10.

Both vehicles observe Earth’s entire surface twice a day while traveling 512 miles (824 kilometers) above our planet at 17,000 miles per hour (27,360 kilometers per hour).

NOAA-21 will be the 21st polar-orbiting satellite operated by NOAA and is scheduled for a mission of about seven years.

Tags
Earth NASA The earth's surface The satellite The space

Apple launches the new 4K Apple TV.. Everything you need to know

What does cyber security mean? And what are its types?