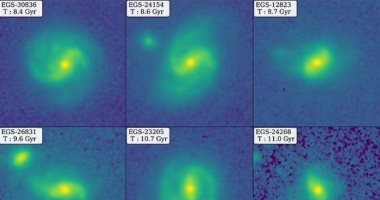 NASA’s James Webb Space Telescope (JWST) has detected galaxies similar to our own Milky Way, which formed when the universe was only 25 percent of its current age, and a single galaxy dates back 11 billion years. These massive clusters of gas, dust, and stars are also the first to feature Stellar bars, elongated features of stars extending from the centers of galaxies to their outer disks, soon after the Big Bang occurred 13.7 billion years ago.

According to the British newspaper “Daily Mail”, there are stellar bars in our galaxy, but this is the first time that scientists have seen them in a galaxy that indicates the beginning of the universe, a discovery that will require astrophysicists to improve their theories on the evolution of galaxies.

“This discovery of early bars means that models of galaxy evolution now have a new path through the bars to accelerate the production of new stars at early ages,” Sharda Joji, professor of astronomy at the University of Texas at Austin, said in a statement.

NASA’s Hubble Space Telescope has detected rods before, but never in such young ages.

The team identified six notable galaxies between eight billion and 11 billion years old, and Yuchen ‘Kay’ Guo, the graduate student who led the analysis, said, “For this study, we’re looking at a new system in which no one has used this kind of data or conducted this kind of quantitative analysis from before, so everything is new..it’s like going into a forest no one has been to before.”

It is worth noting that stellar bars are found in up to 65% of spiral galaxies and influence the movement of stars, dust and gas. Scientists believe that the bars act as a funnel, pulling material into the bulge from the disk and promoting star formation. The bars also help the formation of supermassive black holes at the centers. galaxies by directing the gas part of the way.

A new image from Hubble reveals a cosmic ‘keyhole’