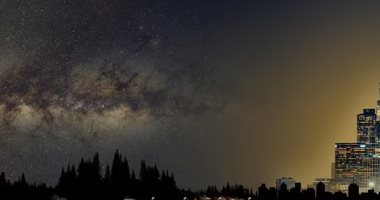 Looking up into the night sky and seeing the distant stars twinkle in your face is fun. From the glowing arc of the Milky Way to dozens of complex constellations, the human eye is able to see these objects and many thousands of stars on a clear, dark night. But there is some bad news for stargazers. , the stunning spectacle is fading due to increasing levels of light pollution.

According to the British newspaper “Daily Mail”, observations of the night sky over the past 12 years reveal that the change in vision decreased by 9.6% due to the brightness of the sky annually from artificial light, and to put this in normal perspective, the researchers say that the child born in an area where it was seen 250 stars is less likely to see 100 stars in the same location 18 years later.

Researchers conducted an assessment of 51,351 citizens of scientists’ observation of stars seen with the naked eye between 2011 and 2022, and to determine the brightness of the night sky, they asked participants around the world to compare star maps to what they could see with their own eyes.

The research, published in the journal Science, was carried out by teams from the German Research Center for Geosciences and the National Science Foundation (NSF) in the United States.

“The increase in skyglow over the past decade underscores the importance of redoubling our efforts and developing new strategies to protect the dark skies,” said Connie Walker, of the National Science Foundation.

How can the magnetic field help explain the formation of the Earth-Moon system?

Did Microsoft accidentally leak the next version of Windows?