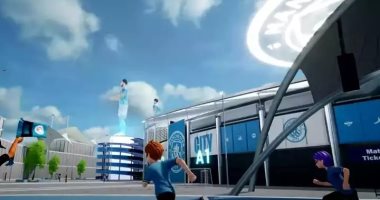 Sony and Manchester City have described the experience as a “proof of concept” (PoC), which will allow players to take part in activities in a virtual version of Etihad Stadium with their avatars, The Verge reports.

And in an official video released by Sony-Global, virtual characters walk around the stadium and field, dance and celebrate together, and Nami Iwamoto, chief product planner at Sony, said during the technology giant’s CES 2023 keynote that avatars, 3D images and “other unique expressions In the metaverse” will allow players to communicate in a “new way”.

Another video showed how Sony used “just seven sensors” to record snapshots and volumetric data of Manchester City players in order to digitally recreate them in this metaverse.

According to a spokesperson for the tech giant, Yu Kikuchi, the “app” will be launched this year, but it is still unclear whether avatar creation, virtual stadium, and highlights will all be included in this app. The partnership was first announced in November 2021. At the time, both Sony and Manchester City used the term “metaverse” and described the effort as a PoC, the report said.

3D drones inspired by bees for manufacturing and building repair

Mark Zuckerberg testifies in the FTC’s antitrust case against Meta