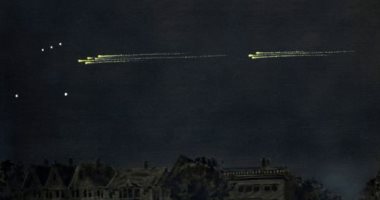 The press service of the Planetarium Center in Moscow announced that residents of Russia will be able to witness several astronomical phenomena in 2023, RT reported.

And a statement issued by the service said, “In 2023, residents of various regions of Russia will be able to witness several astronomical phenomena. Next year, there will be two solar eclipses, two lunar eclipses, phenomena of the moon approaching the Earth, and many meteor showers.”

The statement added, “The first solar eclipse next year will be on April 20. The eclipse will occur on this date between 05:37 and 09:59 Moscow time, and it will be at its peak at 07:17 Moscow time. The second solar eclipse next year will occur.” On October 14, and it will be between 18:05 and 23:55 Moscow time, residents of Russia will not be able to see this eclipse, but it will be visible in different regions in North and South America and from the waters of the Pacific and Atlantic oceans.

The Astronomical Center of the “Planetarium” in Moscow indicated earlier that the inhabitants of some regions of the earth will be able early next year to witness the phenomenon of meteor showers known as Quadrantid, which will peak on January 4.

On this day: Voyager 1 launched into the outer solar system in 1977

Spacewalk at the International Station halted due to a suit malfunction