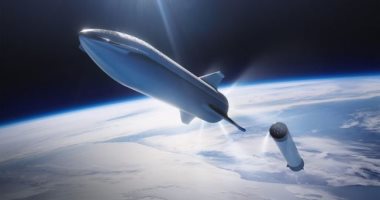 Elon Musk is one step closer to Mars after the Starship spacecraft designed to go to the Red Planet achieved a major milestone before its first launch, as the 395-foot rocket and its companion vehicle were fully fueled and stacked for the first time ever, and SpaceX completed a “rehearsal” to the vehicle at the Starbase facility in South Texas.

According to the British newspaper “Daily Mail”, it is not clear when exactly it will take off for the first time, but Musk said it will be soon, and this test is definitely a step in the right direction.

The billionaire is known for being ambitious when it comes to goals, however, Starship has faced months of delays in getting ready for its first launch.

Starship completed its first full flight-like rehearsal at Starbase today, marking the first time an integrated ship and Booster have been fully loaded with more than 10 million pounds of propellant, SpaceX tweeted, sharing screenshots of the rehearsal.

Today’s test will help verify the full launch countdown sequence, as well as the spacecraft and orbital plate’s performance of flight-like operations.

The rehearsal included many of the procedures SpaceX engineers would perform on launch day, such as pumping liquid oxygen and liquid methane fuel into the very heavy first stage and upper stage of the spacecraft.

Musk said the mission, which would send the spacecraft around Earth, with a targeted landing in the Pacific Ocean near Hawaii, could happen as early as February.

This launch will mark an early milestone in its Starship ambition to carry people and cargo to the Moon and Mars, and SpaceX plans to carry humans into space using a two-stage spacecraft consisting of a Starship (the passenger-carrying section) and a Super Heavy rocket booster.

Steps.. How to secretly read WhatsApp texts without the sender knowing