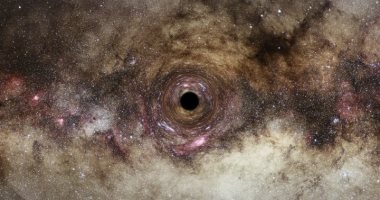 Astronomers have discovered two simultaneously “expanding” black holes only 750 light-years away from each other, and they will eventually unite into a supermassive black hole, according to the RT report.

They were discovered by researchers using the ALMA telescope, the most powerful molecular gas and dust telescope, located in the Atacama Desert.

While the team was looking at two merging galaxies in the constellation of Cancer, 500 million light-years from Earth, they saw something they didn’t expect.

They spotted two glowing black holes, greedily gobbling up the dust, gas and other matter displaced by the merger.

And while black holes are close together in cosmological terms, they won’t merge for a few hundred million years.

Eventually, they will begin to spin around each other, as the orbit tightens and gas and stars pass between them. Eventually, the black holes will begin to produce gravitational waves much stronger than any previously detected, the researchers said, before they collide.

The results also suggest that binary black holes and the merging galaxies they create may, in fact, be surprisingly common in the universe.

Experts said the use of ALMA, which stands for Atacama Large Millimeter / submillimeter Array, was a ‘game changer’ and that finding two black holes so close together could pave the way for additional studies of the phenomenon.

The results of the new research were published in The Astrophysical Journal Letters and presented at the American Astronomical Society meeting in Seattle, Washington.

How to do it.. How to add multiple stops in Apple Maps

Instagram introduces an in-app scheduling service for companies and creators.. Know the details