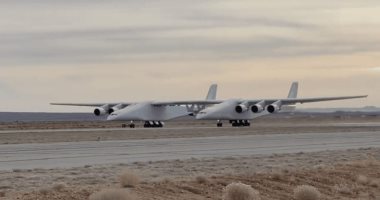 The world’s largest aircraft, the Stratolaunch, completed a record-breaking test flight, flying for 6 hours over California’s Mojave Desert, according to a Sky News Arabia report.

What do you know about “Rock”?

• The wingspan of the giant “Rock” plane is 117 meters, which is longer than an American football field.

• Strange in shape, as it has two structures, and its maximum speed during flight is 340 kilometers per hour.

• The test flight that took off from Mojave Aeronautics and Space Administration in California is the second that the Talon A hypersonic test vehicle has been carried from Startolunch.

• During the last test, the StartoLaunch team performed “maneuvers and sequence calls” for its first-ever detachment test.

• The company hopes to conduct the first Drop Tests later this year.

Eventually, Startolaunch hopes to use the superjumbo to provide “convenient, affordable and routine” access to space, similar to the method used by Virgin Orbit.

What did the CEO say?

• “Our amazing team continues to make progress on the testing schedule, and through their hard work, we are closer than ever to safe separation, hypersonic flight tests.”

• “We are excited about what’s to come this year, as we offer hypersonic flight test service online to our customers and the nation,” according to the British newspaper “The Independent”.

Report: Smartphone sales are bad globally for these reasons

“This site contains malware” .. a warning from Google to millions of users

France imposes a huge fine on Microsoft, 60 million euros.. I know the reason