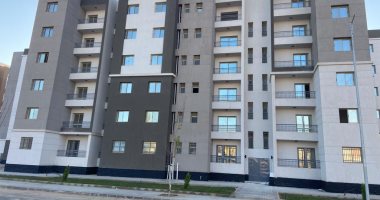 Head of the agency: 95% average implementation rate of 19,344 housing units in the “housing of all Egyptians”… and 90% for 3,360 units in “alternative slums” buildings

Dr. Assem El-Gazzar, Minister of Housing, Utilities and Urban Communities, reviewed the executive position of housing projects, utilities and ongoing services in some residential neighborhoods in the new Obour City, as part of the continuous follow-up of various projects in the new cities.

Engineer Ahmed Ali, head of the New Obour City Development Authority, explained that the 14th district includes 806 residential buildings with 19,344 housing units, model 90m, in the presidential initiative, “housing all Egyptians,” with an average implementation rate of 95%, in addition to 7 commercial markets, 4 medical centers, and 5 Schools with different educational stages, 4 nurseries, 2 five-a-side playgrounds, and a bakery.

The head of the New Obour City Authority confirmed that work is being advanced on the ongoing projects in the city, within the framework of accelerating the implementation rates set for handing over housing units to beneficiaries with full services, within the framework of the developmental role sought by the New Obour City Authority, as well as providing all services to the beneficiaries of housing units. in the 14th district, in preparation for their reception.

The head of the agency stated that it is currently underway in the area of ​​the 806 buildings in the 14th district, completing the work of the asphalt bonding layer in ways and parking areas, and completing agricultural work in the building sites, in addition to the work of installing garden lighting poles as part of the site landscaping work.

The head of the agency said that 96 buildings, comprising 3,360 units, are also being implemented within the “Slum Housing Alternative” project, in addition to 96 administrative units and 96 commercial stores, with an average completion rate of 90%, in addition to the implementation of 53 buildings that include 1,908 housing units, the 75 m2 two-room model, with an average completion rate of 71. %.

The head of the new transit agency explained that the average rate of implementation of social housing services, which includes schools, nurseries, playgrounds, medical centers and a bakery, is 83%, while agricultural work in the 14th district has an average completion rate of 45%.

“Ali” emphasized that the executing companies stressed the need to quickly complete all services at the specified times and with the required quality.

The Holding Company for Construction is replacing 4.1 billion pounds of accumulated debts with lands belonging to its subsidiaries