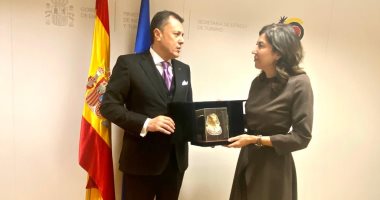 Immediately upon his arrival today, to the Spanish capital, Madrid, to participate in the International Tourism Exhibition FITUR 2023 in its 43rd session, Ahmed Issa, Minister of Tourism and Antiquities, started his official meetings, by meeting with Rosana Morillo, Minister of State for Tourism in Spain, to discuss strengthening means of cooperation between the two countries in the field of tourism, in the presence of Amr El-Kady. CEO of the Egyptian General Authority for Tourism Promotion, Ambassador Youssef Makkawi, Ambassador of Egypt to Spain, and Yemeni Seas, Assistant Minister of Tourism and Antiquities for Technical Affairs.

At the outset of the meeting, the Minister was keen to congratulate Rosana Morillo on assuming her duties as Minister of State for Tourism in Spain, wishing her success in her duties.

The meeting dealt with discussing the signing of a memorandum of understanding between the two countries in the field of tourism, where it was agreed on the executive procedures for signing it, in addition to discussing the exchange of experiences, especially in the field of improving the control environment, which is one of the goals of the ministry’s strategy to develop tourism in Egypt, which the ministry will work on during the coming period.

At the end of the meeting, the minister expressed his wishes for the success of the international tourism exhibition FITUR 2023, which runs from January 18 to 22. He also invited Rosana Morillo to visit Egypt to complete discussions to activate cooperation mechanisms between the two ministries, in addition to enjoying the tourism and archaeological elements that he enjoys. It has the Egyptian tourist destinations.

The Minister of Tourism and Antiquities also attended, this evening, the reception organized by the World Tourism Organization in cooperation with the Ministry of Industry, Trade and Tourism.

Minister of Planning: Putting Egypt’s Vision 2030 within the axes of the national dialogue

Holding for Construction: Implementing projects worth 4.4 billion in a decent life, mostly in Upper Egypt

The stability of currency rates against the Egyptian pound today, Thursday 6-10-2022