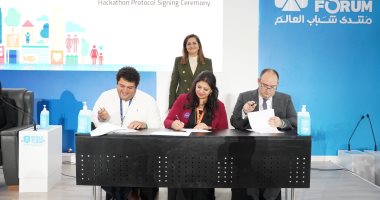 The Ministry of Planning and Economic Development issued the harvest of the Rowad 2030 project, highlighting what it did during the year ending 2022.

Ghada Khalil, Director of the Pioneers 20030 Project, explained that the launch of the project by the Ministry of Planning and Economic Development came as an affirmation of the importance and role of youth in society, and with the aim of spreading the culture of entrepreneurship and the idea of ​​self-employment among young people. In addition to the axis of awareness, as well as the axis of support mechanisms for entrepreneurs.

The report issued by the project included the most prominent achievements in the four axes during the year 2022, as the report indicated that with regard to the first axis, which is education, the project has launched support and capacity building, which includes several activities, including a professional master’s program in cooperation with the universities of Cambridge and Cairo, and the Million Scholarship Riyadi, which aims to qualify one million Egyptian entrepreneurs by 2030, as the platform provides a large package of topics related to entrepreneurship via the Internet in three languages, Arabic, English, and sign language, and in three different qualifying stages, to reach the development of the basic skills required to qualify entrepreneurs, About 50,000 trainees benefited from that campaign, with an average of about 378 training lectures.

The report indicated that within the framework of the project’s interest in business incubators, the Goodwill incubator was launched in cooperation with the Arab Academy for Science, Technology and Maritime Transport, and it is the first of its kind and its main objective is to support and serve people of determination in a more professional way to become entrepreneurs and owners of pioneering projects, as well as being This incubator also serves young people who provide solutions for people of determination, as one of the advanced projects of the incubator qualified to represent Egypt in the “International Expo for People of Determination,” which was held in Dubai from November 15 to 17, 2022.

The report also mentioned the launch of the Women’s Pioneers 2030 Program, in cooperation with the Interprenell Foundation, which represents a business accelerator to support commercial projects and provide opportunities for women to launch and develop their businesses. 400 women graduated from this accelerator during the year 2022. The project also celebrated the graduation of the first batch of a business incubator. Mashreq Tourism, which was established by the project in cooperation with the Arab Academy for Science, Technology and Maritime Transport, where 19 projects graduated, including 10 projects from Aswan Governorate, 9 projects from different governorates of Egypt, with the support and development of some projects affiliated with the incubator and were approved and evaluated globally by Booking, one of the world’s leading companies in field of digital travel.

The report went on to review the project’s achievements for the year 2022, pointing to the implementation of a training program to raise the efficiency of managers of business incubators and accelerators in cooperation with the Entrepreneurship Center at the American University and the Drosos Foundation, from which 120 managers of incubators benefited to support the entrepreneurship system and to ensure that incubators and accelerators are managed in Egypt according to international standards. And to provide the services in which it was provided at the world level, in addition to carrying out meetings with the delegation of African diplomats in cooperation with the Egyptian Agency for Partnership for Development in partnership with the International Business Driving License IBDL, in which 100 diplomats from 20 African countries participated in the activities of the Egyptian-African incubator .

The report also indicated that the project signed a cooperation protocol with the Gemini Africa Foundation to cooperate in implementing the activities of the Egyptian-African incubator in African countries.

With regard to the third axis related to awareness, the report touched on the launch of the “Start Your Future” campaign, of which the implementation of the first phase was completed, and in 2022 the second phase of the campaign was implemented, as the training package for the campaign was approved by the University of Missouri, USA, and trainers were trained on the new training package. And their accreditation to train school teachers on how to implement them with middle school students in public schools, in addition to expanding experimental schools and languages ​​and training trainers on the campaign in English, explaining that the second phase of the campaign has been implemented in 9 governorates so far, where a training was held for 50 trainers. Start your future campaign based on the campaign curriculum, implementing the second phase of more than 500 teachers from 84 schools and targeting more than 44,500 thousand students in the preparatory stage, in addition to training 48 general mentors, 6 senior mentors, 84 school principals and 84 entrepreneurship coordinators, and the goals of the campaign And equipping 30 classrooms inside schools whose teachers have been trained on the entrepreneurship curriculum, and the campaign is being completed in the rest of the governorates of the Republic.

In 2022, the project also witnessed the organization of a summer camp for students of the Start Your Future campaign in Alexandria Governorate for more than 100 middle school students who benefited from the campaign, from different governorates of Egypt. The aim of the camp was to encourage and support students with innovative ideas to develop them and provide them with the necessary entrepreneurial and technological skills. To develop their projects, in addition to personal development skills, and to prepare the student to become an entrepreneur in the future. The “Start Your Future” campaign was also implemented at the university level for 4,500 male and female students in more than 15 Egyptian universities, in addition to the “Be Entrepreneurial” initiative, for the children of workers in various government agencies, which aimed to reach To 3,000 trainees of them, to encourage the entrepreneurial thought of the children of workers in various government agencies and create new job opportunities, in addition to holding many activities aimed at reaching the largest number of young people to raise awareness of the importance of entrepreneurship and awareness of the various activities and services provided by the Ministry through the Pioneers 2030 project to support entrepreneurs .

Regarding the fourth axis, which is related to support mechanisms for entrepreneurs, the project launched, according to the report, the Rowad Meter platform, with the aim of updating the main data and indicators related to entrepreneurship in Egypt on a semi-annual and annual basis to serve decision-makers to support and develop this sector, in addition to establishing integrated business clinics, which are smart clinics that have been established. To provide solutions and consultations from specialists in seven different fields, including legal, business development, marketing and readiness for investment, to serve as support for entrepreneurs in different growth stages with the aim of maintaining the sustainability of startups. The project also opened its own business clinic in the Greek Campus, and hosted The project involved a delegation of entrepreneurs from the African Union to explain a first business model for clinics specialized in supporting startups.

The report referred to the organization of the “Expo Rowad” project, which is an annual forum for startups that aims to network them with investors with the aim of presenting investment opportunities in various sectors to support emerging companies and maintain their growth in the Egyptian market, in addition to launching the Egypt Award for Government Services Applications, which is an annual competition for Egyptian students. In educational institutions in the Arab Republic of Egypt in smart applications for government services via mobile phone, incubation opportunities were provided for the three winning teams in the first edition of the award and work on implementing their smart applications that serve the transport, tourism and interior sectors.

Rowad 2030 also launched Hackathon Egypt 2030 in cooperation with PepsiCo Egypt and Rise Up Company, in which more than 100 contestants representing 35 teams participated competing to win the competition prize, as a number of training workshops were organized for the contestants over a period of three days, in which more than From 50 experts in various fields of business to guide and instruct the contestants, organize lectures to introduce the goals of sustainable development and train the contestants on different methods to display and market their projects and ideas properly.

Last September, the Pioneers 2030 project received the Excellence Award for Technology and Community Service in the category of official bodies, from the Arab Council for Social Responsibility “ACSR” of the League of Arab States, for its great efforts in the field of entrepreneurship, and the launch of the Million Entrepreneurs Campaign, which aims to qualify one million entrepreneurs and contribute to establish 50,000 startups by 2030.

Financial Supervision: Extending the term of liquidation of the workers insurance fund of the Valley of the Kings Milling Company