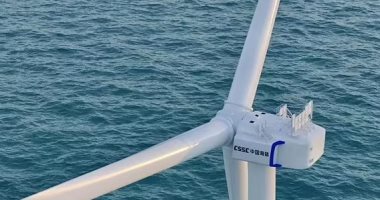 According to the British newspaper “Daily Mail”, the Chinese Haizhuang Shipbuilding Company (CSSC) says that its H260-18MW marine turbine is capable of powering up to 40,000 homes for an entire year. Under full wind speed, the hull generates 44.8 kWh. of electricity per cycle, meaning that a single turbine can generate more than 74 million kilowatt-hours of electricity each year.

Haizhuang says, this reduces coal consumption by 25,000 tons and carbon dioxide emission by 61,000 tons per year, H260-18MW turbines can generate more power, which reduces the cost of offshore wind farm and lays a solid foundation for the development of offshore wind industry.

The company also claims that the higher output of this turbine means that 13% fewer units are needed to generate 1 GW of electricity compared to installing the previous 16 MW model.

While it remains unclear how much the new wind turbine will cost to build, its developers claim it will save more than CNY100m (£12m)” in construction costs.

The prototype of the structure was unveiled at an event in the industrial city of Dongying in China’s Shandong Province. The wind power company says it has mastered the core technologies of highly rated offshore wind turbines and led the global offshore wind power industry to reach a new milestone with the prototype.

It also claims it will help China reach its “30-60” target – the country aims to reach peak emissions by 2030 and carbon neutrality by 2060.

Steps.. How to set up “two factor authentication” for websites and apps from iPhone

What does it mean?.. PlayStation4 surpasses Xbox One in sales