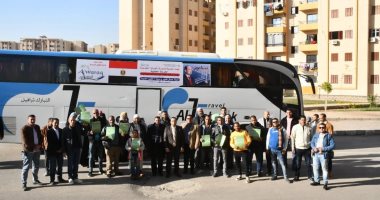 After conducting the 25th public lottery to allocate 28 alternative housing units in the cities of Hadayek October and New October for the eligible residents of Warraq Island, the New Warraq City Authority organized a field visit for the beneficiaries of the units from the people of Warraq Island, to the area of ​​247 buildings in the city of October Gardens, in which part of the units were provided. The alternative is for those who chose alternative housing units, in implementation of the directives of Dr. Asim Al-Jazzar, Minister of Housing, Utilities and Urban Communities, to facilitate procedures for dealing with the people of Al-Warraq Island, as well as providing an appropriate and consensual alternative for the people of the island..

The visit began with a full explanation to the beneficiaries, about the area of ​​​​247 buildings in the city of October Gardens, in which part of the alternative units has been allocated, in terms of the services that have been and are being implemented, and the development plans in that area, in the presence of officials of the two development agencies for the cities of New Warraq and October Gardens..

The beneficiaries of the units from the people of Al-Warraq Island toured the locations of the buildings in which the alternative units are located, and they expressed their admiration for the area, and they raised a number of questions and inquiries about how to move to and from the area in which the units are located, and the locations of schools, markets, shops, and so on, which were answered by officials of my apparatus New Warraq and October Gardens, that all services have been provided in the region.

In the same context, members of the beneficiary families of the 25th lottery for alternative units in the cities of Hadayek October and New October praised the locations of the units in terms of green areas, services, quality of roads, and easy access to buildings other than what they were during their stay on Warraq Island, and they also took memorial photos..

Eng. Osama Shawky, Head of the New Warraq City Development Agency, indicated that this is the twenty-fifth lottery for the alternative units axis for the people of Warraq, and so far the files of 334 families who have agreed to the option of alternative units have been dealt with, pointing out that procedures for handing over these units will take place, and coordination will take place. With the Ministry of Social Solidarity, to furnish and equip alternative units for the relocated free of charge.

Engineer Osama Shawky added: A public lottery was held for the first units in October Gardens City, followed by voting for alternative housing units in New October City, where the beneficiaries themselves chose ballot papers containing details including unit and building numbers, and after that they received the allocation letters, adding The alternative units, with an area of ​​90 square meters, are a model of 3 rooms and a hall, and it was emphasized that any notes about the units should be avoided during delivery..

In a related context, the head of the New Warraq City Development Authority explained that a number of residential towers (alternative housing) are being implemented in the new city of Warraq with advanced implementation rates, for those residents who wish to return to the island after its development, in addition to carrying out various works to develop Warraq Island, and establish A modern civilized urban community in it, in order to raise the urban level of the island, and to show it in a civilized form that is appropriate to it..

It should be noted that the new city of Al-Warraq is one of the fourth-generation cities that are being implemented, within the framework of the efforts of the Ministry of Housing to implement the outputs of the National Strategic Plan for Urban Development in Egypt 2052, whose most important goals are to double the population from 7% to 14. %.

For businessmen.. 6 new bonds to finance projects, most notably the climate to reduce carbon