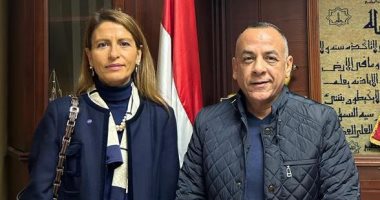 During the meeting, Dr. Mostafa Waziri expressed his appreciation for the efforts made by the UNESCO Regional Office to preserve the human heritage, praising the close relations and fruitful and effective cooperation between Egypt and the UNESCO Regional Office, which is evident in a number of existing projects, including the Nubian Museum in Aswan, and a project to improve the means of display and interpretation of archaeological sites. In Egypt, which aims to enhance the experience of Egyptian visitors and tourists by improving the presentation and interpretation of sites with informative and explanatory panels, in addition to the project to develop and rehabilitate the Museum of Islamic Art and related museums and other projects that would preserve human heritage.

The Director of the UNESCO Regional Office expressed her happiness with this meeting, and praised the achievements of the Supreme Council of Antiquities in the field of excavations and archaeological discoveries, especially in recent times.

Planning: the transport sector accounts for 50% of the volume of green projects