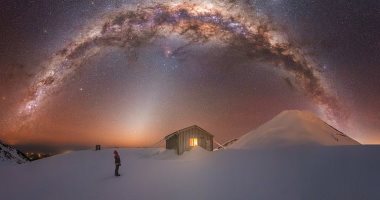 An international team of astronomers has detected for the first time a radio signal emanating from a galaxy some 9 billion light-years from Earth, according to a recent study. RT.

Scientists from Canada and India were able to pick up a signal from the named galaxy SDSSJ0826 + 5630 With the help of a giant telescope in India.

The radio wave could allow astronomers to go back in time and understand the early universe, which is thought to be about 13.7 billion years old..

Arnab Chakraborty, a cosmologist and co-author of the study on the discovery of the waves, told the British newspaper, “Metro”, “It is equivalent to looking back in time of 8.8 billion years.“.

The signal was not sent by extraterrestrials, but instead came from a star-forming galaxy that was emitted when the universe was only 4.9 billion years old. This is the first such detection of a wireless signal from such a huge distance.

Chakraborty added, “A galaxy can emit different types of radio signals. Until now, it was only possible to pick up this particular signal from a nearby galaxy, which limits our knowledge to those galaxies closest to Earth.”“.

Observing the wave was a particularly important finding because the frequency was at a specific wavelength known as the “21-cm line”. This is also known as the hydrogen line and is the spectral line of electromagnetic radiation with a frequency of 1420.

Hydrogen is spread through space and could help map galaxies. A 21 cm line is used to do this.

The giant telescope was in India Giant Meterwave able to pick up the faint signal due to gravitational lensing. It is a naturally occurring phenomenon.

The study co-author explained that gravitational lensing was a naturally occurring phenomenon that “amplified the signal coming from a distant object to help us look into the early universe.”“.

Another galaxy bent the radio signal emitted from SDSSJ0826 + 5630which then amplified the wave and allowed the telescope in India to capture it.

Scientists used the detection to measure the galaxy’s atomic mass content. And they discovered that this particular galaxy is twice as massive as the stars visible to us from Earth.

This feature prevents getting a screenshot from WhatsApp.. Get to know it

Small video games make up for a year of delays.. know the details